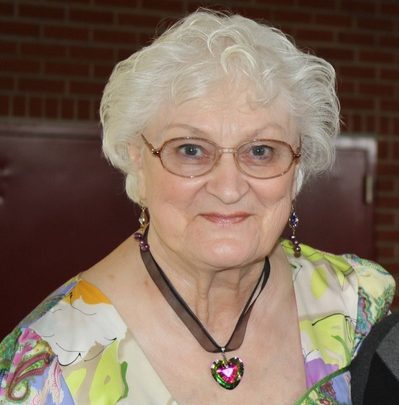 She is also survived by six great-grandkids, Toby, Elle, Davian, Tyler, Libby and Parker, and many nieces, nephews, cousins and loving friends.

Mary was born in 1934, in Ipswich, SD to Joseph W. and Eleanor (Weiss) Joynt. She was the fifth born of nine children. Her childhood was spent in Zell, SD. She shared many happy memories of the Zell Hotel that her Grandma Weiss owned and operated, especially the nights her grandma made her hot chocolate! Her parents ran Joynt’s Joint, which was the best pub and gathering place in town, never mind it was the ONLY pub and gathering place in town! The grade school she attended in Zell was a 1-4 room and a 5-8 room. She has also shared many happy memories of her high school days at Mount Marty Boarding High School for girls. Her freshman year, two of her sisters, Donna and Belva were there in the Rainbow Dorm. Her parents sent care boxes every Friday to the boarding school filled with candy bars and goodies from Joynt’s Joint – all the nuns would come to mom’s room to share the treats.

She met Larry at a dance in Zell. For at least the first year they dated, she thought his name was Digger, it was a nickname he earned digging graves for his dad’s Monument business.

Her first year out of high school Mary attended college in Aberdeen and then taught school, all eight grades, in a one-room school house between Rockham and Zell. She married Larry in 1953, and they moved to Norfolk VA, as Larry was in the Navy. Jeff was born in the Navy hospital in Portsmouth, VA in 1954. They moved back to Redfield after four years of Navy service, 1951-1955, and in January, 1956, Jeanne was born in Aberdeen, SD. As the story goes… they were at her sister Donna and husband Bob’s house in Aberdeen playing cards, pinochle, no doubt! Mary must have been on a winning streak because she barely made it to the hospital; Jeanne was born only 20 minutes after arriving at the hospital. They later moved to Watertown for about 3 months then Larry got a job with Remington Rand in computers and they moved to St. Paul, MN. From there they moved to Los Angeles, CA, then to Sacramento and from there to Chicago. Charles was born in a suburb of Chicago, IL in 1960. More moving… They moved to Phoenix and then to Fords NJ for a couple years. They moved back to Phoenix, AZ for three years, then back to Sacramento. Jim was born in Sacramento, CA in 1972. Moving was finally over and they made Northern California their home ever since.

Mary and Larry started and managed a print shop in Sacramento, CA around 1978, named Charley’s Copy Joynt, honoring both family names. They also purchased and managed an art gallery in Fair Oaks, CA for over 30 years, named The Frame Stop and Gallery.

Mary and Larry strengthened their Catholic faith at their beloved Divine Savior Catholic Church in Orangevale, CA. They developed friendships with fellow parishioners that have stood the test of time and they were active in the social activities within the church community. They attended daily mass. Larry and Mary had a standing date for breakfast after Sunday mass at Jeanne’s house. Mary’s favorite pastime after breakfast was looking at model homes. She’d have the Sacramento Bee all mapped strategically with locations all over town. Some of our favorite times and happiest memories spent together.

Mary’s love of cooking, baking, and gathering with family and friends will be missed by all who knew her. Mary had a generous spirit and she welcomed everyone. When invited to a pot luck her response was always, I’ll bring dessert! Mary and Larry hosted pinochle card nights at their house on Hoffman Lane on the weekends. Tons of food was spread and laughter and eating took place. Their many friends and family remember those nights, fondly.

Vacations and weekend mini-vacations were spent camping in their motor home, boating and water skiing on every lake within a 200-mile radius, always with family and friends along for the ride. “Bring a RED TOWEL,” my dad would always say so we could see you on the shore and come pick you up! Who owns a red towel?

Many, many barbecues, picnics, and birthday celebrations on Hoffman Lane on the patio surrounding their backyard pool. Everyone went home soaking wet, if you wore a swimsuit you jumped in voluntarily, if you were fully clothed you were pushed in “involuntarily!” Food and, of course, dessert, family and friends, everyone welcome. Mom, you are truly missed and deeply loved. We all love you, your husband, your children, your grandchildren, your great-grandchildren, your family, and your friends… till we see you again wrapped in your arms for a hug! Miss you too, mom.