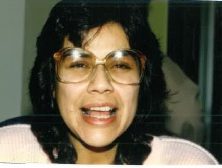 Alta Grace Castillo, age 62 of West Sacramento, passed away on Saturday, December 10, 2022. She was born April 22,1960 in Sacramento, CA and passed away due to complications of diabetes and end stage renal failure. She was predeceased by her parents, Higinio and Rose Castillo, her brother in law Chuck (C.F.) Hildebrandt, and nephew Christopher Castillo Sr. She is survived by sisters Diana Castillo, Esther Hildebrandt Letticia Castillo, Mary Castillo, Dividica Leonard and sister in law Kathryn Castillo (Gene). Brothers Joaquin Castillo and Gene Castillo and brother-in-law, Rob Leonard. She was an aunt to numerous nephews and nieces and friend to many more. She graduated from Washington High School and Sacramento City College and was hired as one of the first employees of the California State Lottery with which she worked her entire state career having to retire in 2012. She was an avid Raider football and Oakland A’s baseball fan and she could extol you with facts and statistics about both teams with the best of them. Services are scheduled for 10:00 a.m., Tuesday, January 3, 2023 at St. Mary’s Cemetery and Funeral Center 6509 Fruitridge Rd, Sacramento, CA.