For almost a century, George L. Klumpp has been a long-standing and prominent name in the Sacramento area. After obtaining a funeral embalmer’s license in 1916, George started his own business and later relocated, on January 14, 1939, to the beautiful “George L. Klumpp Chapel of Flowers” at 8th and O Streets.

Elected Mayor of Sacramento in 1947, George was an avid racehorse owner and fan, and part owner of the minor league baseball team the Sacramento Solons. He supported many veteran and fraternal organizations along with various athletic sports and teams. This support continues today with his legacy of “giving back to the community.”

After George and his wife Jane passed away, the business was acquired by then managers A.L. Barnard and Robert W. Oehler. In June 2013, the Diocese of Sacramento acquired the George L. Klumpp funeral home. The 8th and O Street location prided itself with the outdoors effect of over 250 flowering plants along the indoor flower lanes on each side of the chapel. That beautiful setting was disrupted when the State of California demanded the property to house the California Arts Commission. In 1972, Barnard and Oehler relocated the business to its current 2691 Riverside Boulevard location across the street from City, Masonic, and Odd Fellows Cemeteries in midtown Sacramento.

Please note that our office will be closed in Observance of Independence Day July 4, 2019 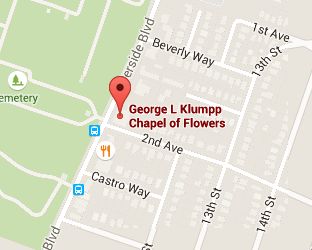